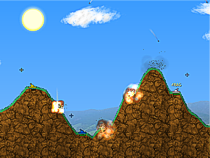 A fast-paced party game where five players can shoot it out simultaneously with tanks. Works best when you can get 4+ people in front of a single computer, as this is where the battles become fun and frantic.

As most of my games, this one was originally created for a contest. This particular competition imposed a rather unusual restriction: the entire game had to be possible to play using just one button (per player). Two weeks of development later, I had a curious real-time version of Scorched Earth with a quirky name. The game fared reasonably well in the contest, placing somewhere in the bottom-half of the top 20 – although I don’t remember the exact place, and can’t find the competition results anymore. Outside of the competition it was not played widely, though I got some reports from IT students in Chile about the game ruining their concentration during classes.

When launching this blog, I took the original code from 2005 and modernized the game a bit, introducing a fast-paced “frag battle” mode in the process. This turned out to be way more enjoyable than the original “king-of-the-hill” battles, mostly because it’s non-stop and getting blown up is just a two-second break in your gameplay instead of a long wait for the other players to finish.

Hope you enjoy this updated version. Scorch Went Bonkers is available as a binary for Windows, but if you’re a coder, it should still be possible to build it from sources on Mac or Linux.

Compact Conflict
Battle for domination of a small continent with AI or friends.