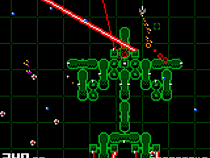 Play it: here | on Kongregate | on Newgrounds
Visit: the competition page

A demake of a classic indie shooter made for a contest specifically asking for such demakes. It turned out that this effort was good enough to win the GameJolt competition, and after a few more updates, good enough to be sponsored by Retromundi, a portal specializing in retro-style games.

The game was received quite well, although it fared much better on Newgrounds, where its rating sits at 3.75 out of 5, than on the slightly more casual Kongregate, where its score is a full half point lower. It was praised for the constantly adapting bosses and being a faithful, but original remake of Warning Forever. The addition of upgrades was also well-liked. However, the game was not without flaws, and the biggest one turned to be the hard-to-master aiming, which turned off many players.

So, if you are willing to give the game a spin, be ready to try a few times before you get used to the aiming mechanism. The game can be played right here, as long as you have a Flash plugin in your browser. Do have a good time!

Compact Conflict
Battle for domination of a small continent with AI or friends.