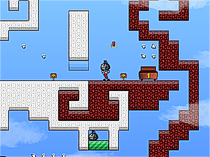 Created for Speedhack 2009, this is a short puzzle platformer game. The rules called for taking a mundane everyday task and turning it into an epic adventure. Ladies and gentlemen, I give you - an epic taking out the garbage simulator.

The game scored second place in the competition, yielding only to a game about programming while in freefall at 50,000 feet. Hard to top that. While not the winner, I’m pretty happy with the result - especially given that the bulk of the work was done inside of 3 days (plus some fixes and corrections after the competition). The jumping physics need a little getting used to, but once that’s done, the core puzzle gameplay is solid, with each new level introducing a fresh challenge - switches to hold down, creatures to be thrown, lasers to avoid, and more.

At 14 levels, it’s quite short – but that also means that you won’t lose much time by giving it a spin!

Warning Foregone
Shoot progressively harder bosses as they evolve and adapt to your tactics.